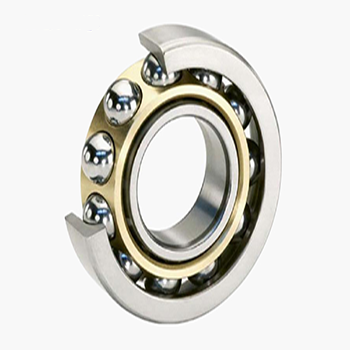 Angular Contact Bearings that is also known as Angular Contact Ball Bearing and Spindle Ball Bearing is quite a popular ball bearing that is used for axial load support. Because of its particular shape and design, it is given these names. Although this Bearing is a suitable option for supporting axial load but it cannot possibly be used as a single bearing because of design limitation instead it should be used in pairs or combinations. Let’s talk about these bearings in details.

Angular Bearings consist of two separate rings that we can call inner and outer ring because of their placement. Both of those rings are separated via ball and a cage that holds ball separately without displacing them. Depending on the application and variation, Angular Bearing might have one or two raceways on either inner or outer ring or both.

Same goes for the angle that might vary from 15 degrees to 40 degrees depending on the application. In different variations of these bearings, this contact angle changes that results in increased carrying capacity of the Angular Bearing. On the other hand, by increasing the axial load by changing the contact angle, radial load capacity decreases.

Cage that holds all the balls separately is usually made of brass, steel and even polyamide. Obviously special cage material, coatings, lubricants and corrosion resistance are added in order to enhance the overall performance of these bearings.

They are mostly used in machinery which need high performance and high ac curacies; most of the machines used in agriculture, chemical and other general industries use Angular Contact Bearings. As mentioned above, Angular Contact Bearings are suitable for carrying combined loads and usually they come in 15, 20, 25, 30 and 40 degree angles while custom angles are made for special applications.

The asymmetrical design of this Bearing provides high thrust capacity because of the contact angles that ultimately results in combined and balanced load capacity of axial load and radial load that are being applied at the same time.

Angular Contact Bearing is designed to handle high axial load as well as moderate radial load concurrently and its particular design with double rings and balls allows it to transfer the overall load from one raceway to another in perpendicularly.

On the other hand, because the loads are applied externally to either inner or outer ring and the load also transmit from one ring to another at the a particular angle, both raceways get the same angle of contact that ultimately results in a simple rule; the higher the axial load, the lesser support for the radical load and vice versa.

SWS Bearing Co., Ltd. is a large bearing manufacturer in Shandong, China. We were founded in 1997 and have more than 20 years of experience in bearing manufacturing. Now it is a bearing supplier integrating production and foreign trade sales.

The theme is provided by SWS-bearings.com & developed by China Shandong SWS-Bearings Co., Ltd.